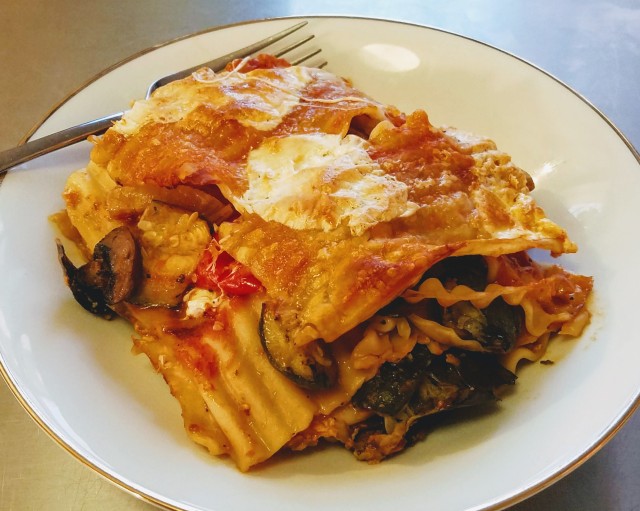 I recently completed a sprint triathlon, even though I hate running (and exercise in general). One of the only things that gets me through the training is the ability to eat whatever I want because I know I’ll burn the calories off later. This lasagna, which I made for carb loading the night before the race, is the cherry on top.

I love lasagna, and I think it’s one of those special dishes where eliminating meat does not leave you feeling unsatisfied in the least. I based this recipe off a great baked penne recipe from Giada De Laurentis combined with another random lasagna recipe that I had in my arsenal. My general feeling about lasagna is that you can never have too much filling, as long as the pieces of vegetable (or whatever) are not cut too large. However, when adding vegetables to a noodle casserole, it’s critical to consider the amount of water that is contained within the vegetables and that will leak out when they’re cooked. For that reason, both Giada and I roast the vegetables before combining them with the other ingredients, so that most of the liquid is already out and doesn’t make the lasagna wet.

On the plus side, this vegetable mix goes really nicely with lasagna and makes it feel hearty without the meat. In this particular iteration, I did not make enough sauce or enough ricotta mix. I would do at least 50% more sauce next time and double the ricotta. However, the dish’s main suffering was that it was very under salted. I would start by doubling the salt at every level and tasting especially the cooked vegetables and the sauce to salt to taste. Without the salt, the whole dish just tasted a little flat.